11 Different Types of Decision Making – One for Every Situation

Some decisions are made quickly, while there are others that involve a lot of deliberation. Then there are those that can't be altered, as compared to ones that can be revoked. The types of decisions differ according to the situation. 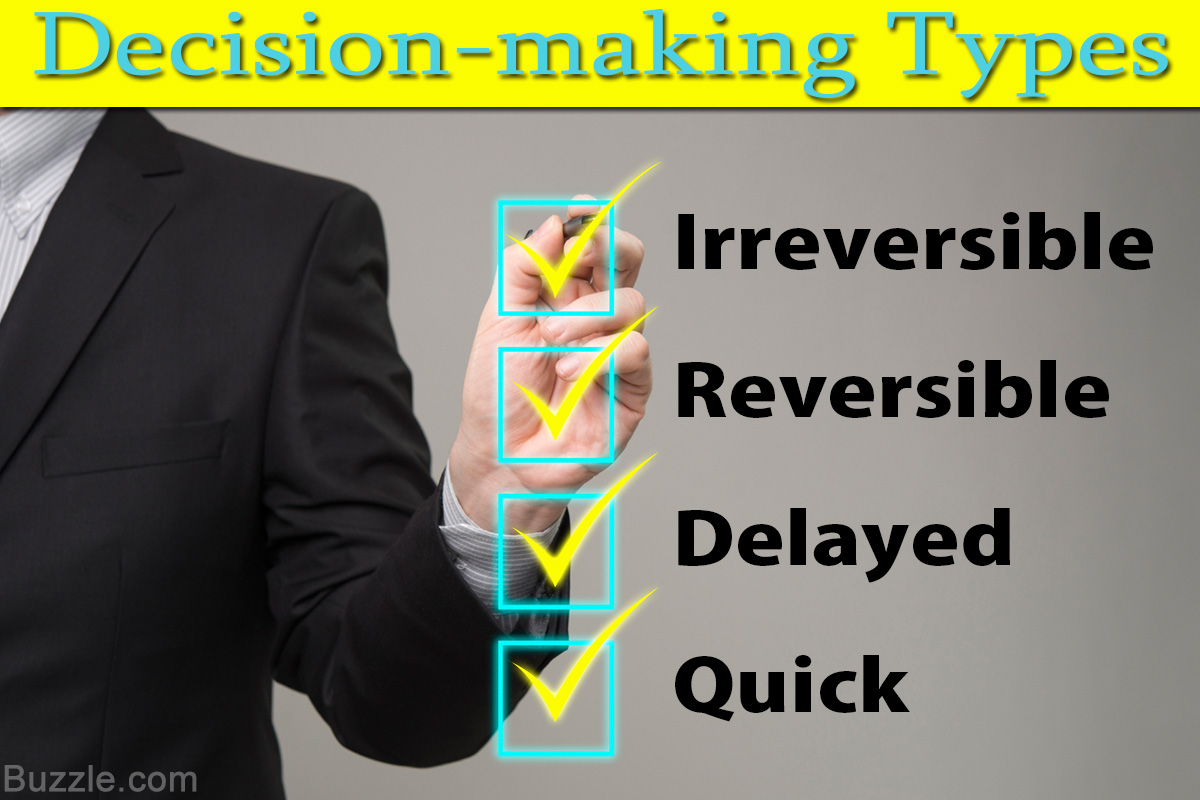 Some decisions are made quickly, while there are others that involve a lot of deliberation. Then there are those that can’t be altered, as compared to ones that can be revoked. The types of decisions differ according to the situation.

The poem The Road Not Taken by Robert Frost, highlights the dilemma that human beings face while making decisions. Decision-making refers to the thought process involved in choosing the most logical choice from among the options available. It may be looking for a new cave before the approach of winter, or signing a long-term contract with new business partners, intelligent decisions have been instrumental in the survival and prosperity of the human race.

The ability to take the right decision in a complex situation, is what sets an average individual apart from the rest. Though the ability of arriving at the correct decision within a short span of time is a highly valued trait, one cannot follow a set pattern of action every time. Hence, there are different types of decision-making that we employ, to deal with different situations. The following are the most common types of decision-making styles that people use to confront various tasks in life.

➣ Reversible
Reversible decisions are not final and binding, they can be retracted at any point, and another more fitting decision made. It allows one to acknowledge mistakes and undertake relevant damage control, depending on how the new circumstances play out.

➣ Delayed
Such decisions are put on hold until the decision maker thinks that the right time has come. This delay might cause one to miss certain opportunities that may present themselves, especially in the case of businesses, and may lead to losses. However, such decisions are the norm for large bodies like the government, which decide policies that affect the lives of millions of people. The time taken to collect all information required and to organize plans of implementation, is crucial to the ultimate well-being of the public.

➣ Quick Decisions
These decisions enable one to make maximum use of the opportunity available at hand. However, only a very astute personality can take decisions that are both instantaneous and correct. In order to be able to take the right decision within a short span of time, one should also take the long-term results into consideration.

➣ Experimental
One of the ways of decision-making is the experimental type, where the final decision cannot be taken until the preliminary results appear and are positive. This approach is used when one is sure of the final destination but is not convinced of the course to be taken. Experimental decisions are common in fields such as medicine, where the product being tested goes through several phases, and decisions may change with every iteration.

➣ Trial and Error
This approach involves trying out a certain course of action. If the result is positive it is followed further, if not, then a fresh course is adopted. Such a trial and error method is continued until the decision-maker finally arrives at a course of action that convinces him of success. This allows a manager to change and adjust his plans until the final commitment is made.

A leader provides direction and guidance to his followers. He is responsible for ensuring that his decision steers the organization in the right direction. Be it in business, politics or government, the ability to take sensible decisions is an important component of leadership skill. The different ways of decision-making that leaders usually follow are:

✓ Authoritative
The authoritative leader is the sole decision maker, his orders are to be followed by the subordinates to the letter. The leader has all the information and expertise required to make a quick decision. Here it is important that the leader be a level-headed individual who weighs his decisions in the light of the data present. He will be the one facing the consequences, if the decision results in failure. Though effective, in case the leader is an inexperienced individual, it can harm the organization if he insists on taking the decision himself, even when there are experts available to help him make an informed choice.

✓ Facilitative
In facilitative type, both the leader and his subordinates work together to arrive at a decision. The subordinates should have the expertise as well as access to information required to make decisions. Such an approach could be useful when the risk of a wrong decision is very low. It is also a great way of involving and encouraging subordinates in the working of the organization.

It would be a blessing for leaders and policy-makers worldwide, had there been a universal model for decision-making. However, due to the dynamic nature of reality, be it our workplace or our personal lives, we have to resort to different types of decisions, using our instincts, intelligence and adaptability to make the best of the conditions.