Courage is, no doubt, the shield of the common man. When in trouble, the hero in every one of us awakens to save the situation. This MissionSelf article enlists such courage stories of real-life heroes. 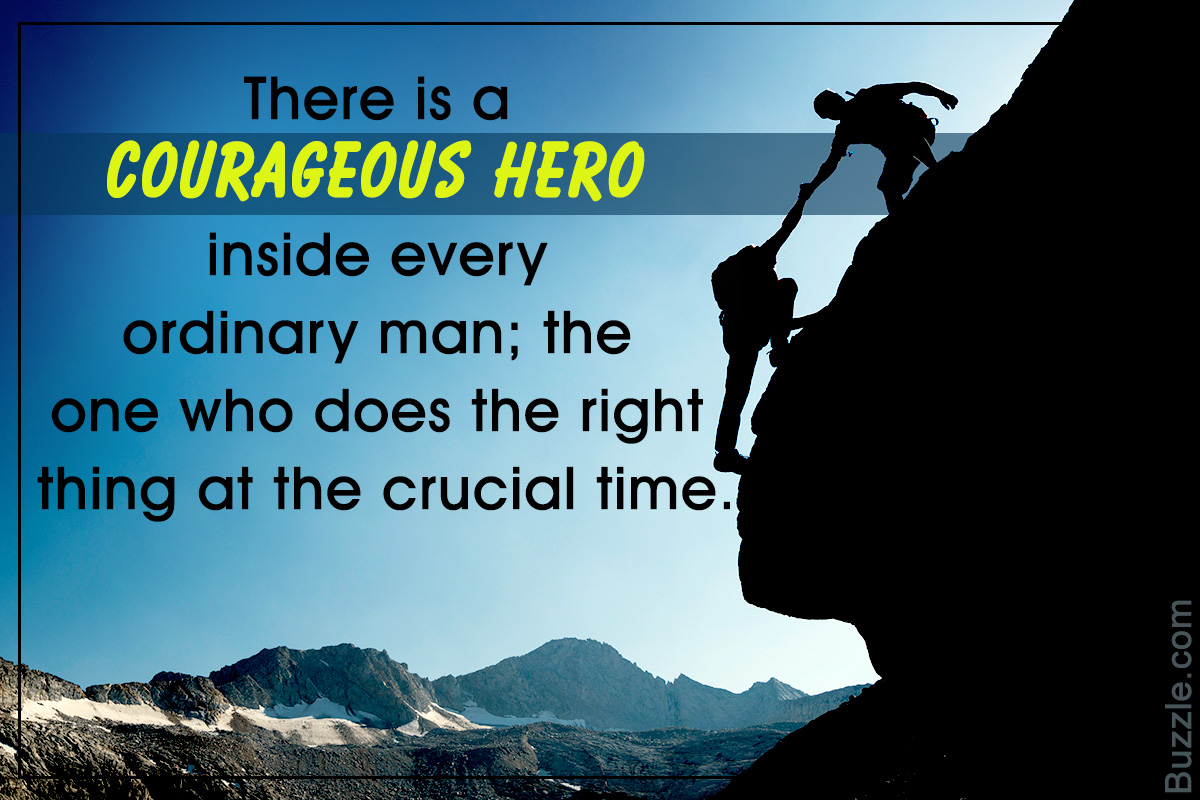 Courage is, no doubt, the shield of the common man. When in trouble, the hero in every one of us awakens to save the situation. This MissionSelf article enlists such courage stories of real-life heroes.

Corporal Carl Taylor, from Birmingham, serving as a Section Commander in the 3rd Battalion of The Mercian Regiment in the Helmand Province, Afghanistan, in March 2011, risked his life twice as he saved two small boys trapped in crossfire when his patrol was under attack.

It is very easy to talk about valor and being courageous, and an equally difficult task to actually demonstrate this quality. As it is said, courage is not the absence of fear, but when you fight and overcome that fear. There are different types of courage; it is an act of courage to stand up for what you believe in, to go against what is wrong, to save people in trouble, to overcome your fear for the sake of the higher good.

Would you like to write for us? Well, we're looking for good writers who want to spread the word. Get in touch with us and we'll talk...

Watching superheroes on television is limited to the screen, for there are no superheroes in real life. There are only simple, hard-working human beings, many of whom have displayed outstanding courage in the most improbable of situations. Some of the best examples of courageous people in history include Nelson Mandela, Mahatma Gandhi, Helen Keller, and many, many more, who have demonstrated exemplary courage and have contributed something significant to society. Here, we have mentioned some real-life instances of ordinary individual who displayed exceptional courage when the situation demanded so.

What this child demonstrated in a crucial moment can be considered as one of the vital acts of courage in everyday life. In Bristol, Great Britain, seven-year-old Ramona Gibbs saw a car spinning out of control and steering towards Trixie, her little sister. Without wasting a second and using her involuntary instincts, Ramona pushed her sister out of harm’s way and the bore the impact herself, which caused severe injuries. Her bravery did not come to light until her sister told their mom that Ramona pushed her out of the way. For her presence of mind and courage, Ramona was awarded the Child of Courage award.

On 16th January, in Sheperd, Michigan, James Persyn was at home, watching television, when someone banged heavily on his door. Nervously, he opened the door and noticed a terrified woman, with a bruised face and body, wrapped with packing tape. She said that she somehow escaped from a man who had molested her at gunpoint and was kidnapping her in the car. Though terrified, James used his presence of mind and ushered his siblings and the woman into the bathroom. He turned off the lights and locked all the doors of the house. He called his dad and the woman called 911, but before help could arrive, the alleged kidnapper arrived on the scene and set fire to the house. Luckily, James’s timely call meant that the police and ambulance arrived at the spot before any lasting damage could be done.

This brave The 16-year-old saved a boy from drowning. Kole Devisscher was driving along the Red River in Manitoba, when he spotted a young, 10-year-old boy struggling to get out of the ice. Kole used his truck’s tow strap to make a loop and instructed the boy to wear it around his shoulders, following which he pulled the boy out of the ice. The boy had already begun to turn blue because of the ice; a few more moments of delay would have definitely rendered him in a serious condition. Kole was given a special award for his courage.

A simple, 57-year-old teacher, David Benke exhibited astounding courage on the 23rd of February, 2010, when the Deer Creek Middle School in Littleton, Colorado, fell prey to a mysterious attacker who began shooting randomly on the school grounds. Despite the danger, Mr. Benke ran to the shooter and valiantly knocked him to the ground, giving enough time for the rest of the staff to tackle the situation. The attacker had shot two students, who were later taken to the hospital and treated. Had he not taken the initiative to attack the shooter without fear, probably, no one else would have done so.

Undoubtedly, these two can be included in the list of rather courageous women. When it comes to physical strength, women are biologically considered weaker, but Lauren Kornacki and Angela Cavallo have proved that superhuman will and effort can give you all the strength you need.

In Virginia, Lauren’s father was working on his BMW when it slipped off the jack and landed on his chest. Instead of panicking, Lauren lifted the car all by herself and shoved it aside; having learned the basics of emergency medical techniques, she even administered CPR until the paramedics arrived. Similarly, in Georgia, Angela Cavallo lifted a 3,000-pound car off her son’s chest, all alone, and kept holding it for five minutes, until the neighbors pulled her son out of danger. Remarkably courageous.

In New Mexico, the driver of a school bus had a sudden seizure. A girl who was waiting for the bus saw what happened and called out to her mother. Rhonda Carlsen kept calm and ran alongside the bus, gesturing one of the students to open the door. She ran with all her strength, got inside the out-of-control bus, and quickly bought the bus to a stop. Her quick thinking and courage saved all the children from harm as well as any passers-by who may have been affected.

Would you like to write for us? Well, we're looking for good writers who want to spread the word. Get in touch with us and we'll talk...

What Mr. Autrey did is certainly one of the exceptional real-life examples of bravery. While he was waiting for his train in New York City on the 2nd of January, 2007, with his young daughters, he noticed a young man, 20-year-old Cameron Hollopeter, fall to the ground due to a seizure. He fell in between the two rail tracks, and the train had finally arrived―speeding insanely towards Cameron. Without a moment’s hesitation, without bothering about his own life, his daughters or anything else, Mr. Autrey jumped onto the tracks and pushed Cameron into the gap between the rails so that the train rolled over them. Thankfully though, it stopped in a few minutes and the two men were pulled out of the tracks. Cameron’s life would have been lost had Mr. Autrey not used his presence of mind and taken timely action. How many of us would actually have the courage to do this?

This amazingly brave man Shavarsh Karapetyan not only saved 20 people from drowning in an underwater bus accident, but has also saved several people from a burning building. During a training session in Armenia, he witnessed a bus with more than 90 passengers, hitting a reservoir about 80 feet from the shore. Without wasting a single minute he swam to the area and pulled each and every one of the passengers to safety. Unfortunately, the bus was already 33 feet into the water, but he managed to save at least 20 of the passengers.

Courage is demonstrated in how one handles a critical situation as well; it displays the psychological strength of the person. Teenager Alice Pyne of Britain is a major example. Alice was diagnosed with terminal cancer; the disease, however, had not broken her spirit and her will to live each day to the fullest. Many would have lost the desire to do anything in life, given the seriousness of the disease. Not Alice though. She created a wish list with things she wanted to do before she died, and at the top of the list was to get people to sign up for bone marrow donation. Over 40,000 people signed up for the same, and Alice was awarded the ‘Teenager of Courage Award’.

While shopping in a quiet store on the 6th of November 2010, in Vancouver, Canada, wheelchair-bound Larry Skopnik witnessed a tiff between a suspicious customer and the store owner, Cindy Grewal. A man handed Cindy a 50-dollar bill for cigarettes, she refused to accept it, stating that it was fake, and intended to call the police to sort out the matter. The man denied the accusation and began attacking Cindy, after which Larry immediately wheeled over to the counter, attacked the man despite being on the wheelchair, got on top of him and held him down. Meanwhile, the store staff came running for help, called the police, and handed over the robber. Had Larry not intervened on time, the robber may have harmed Cindy and perhaps the other employees as well.

This brave teen pulled out the driver of a truck hanging dangerously on the edge of a cliff, in 2008, in New Zealand. A neighbor told him about the accident, and 18-year-old Peter immediately called his family and the police. He rushed out and saw that the truck was at the extreme edge of the cliff, close to falling down below, with the driver dangling on the cab seat. At the risk of his own life, he climbed down the cliff until he reached the space between the truck and the cab. He pulled out the driver from the window and together, they climbed back to safety.

A senior occupational therapist at the King George’s Medical College, Lucknow, India, Rajinder Johar had never imagined that a freak gunshot by a petty robber would render him paralyzed. But, the exceptionally courageous man that he was, he learned to type using two fingers and the thumb, and eventually started a magazine that helped create awareness about people with disabilities. He also started a trust called ‘Family of Disabled (FOD)’ that helps the people with disabilities to seek job opportunities.

This courageous 14-year-old boy saved a young boy from a burning building. On a quiet evening, he and his father were interrupted by a commotion in the neighborhood in Oregon, which was actually due to a fire that broke out in their neighbor’s home. Marcos rushed inside the burning house to save an 8-year-old boy―he got a ladder and climbed to the 2nd floor, and gestured the young boy to get out from the window. Despite the brave act, Marcos remains humble.

Many such acts of bravery are demonstrated by people every day, every minute. It is important that we learn from their instances and exhibit courage and presence of mind in crucial moments as well, not just for ourselves, but our fellow human beings too.

13 Signs That Say You’re a Slave to Your Emotions

Does Motivational Speaking Work or is it a Fable for a Few Hours?

Any cookies that may not be particularly necessary for the website to function and is used specifically to collect user personal data via analytics, ads, other embedded contents are termed as non-necessary cookies. It is mandatory to procure user consent prior to running these cookies on your website.